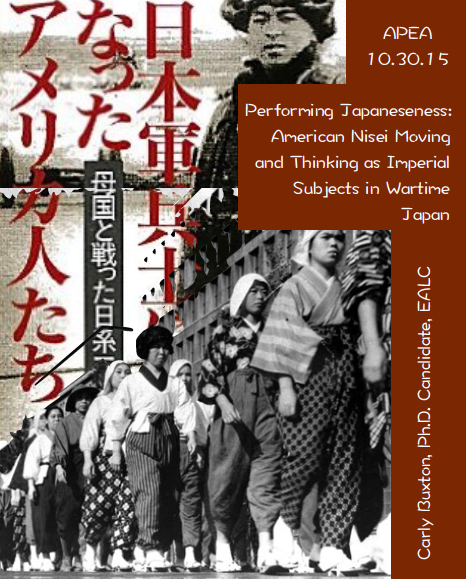 On Friday, October 30, please join us in welcoming Carly Buxton, who will present a work-in-progress version of her dissertation chapter. As Carly explains, “In this chapter, I examine the ways in which the physical environment and social discourse surrounding American Nisei (second generation Japanese) in wartime Japan stimulated Nisei to stifle their American traits and perform the roles expected of Japanese citizens.  Nisei were fused into the imperial populace via the same channels of the physical body through which they were severed from the American populace; their speech, thought, physical appearance, and bodily movement were not only directed away from the concept of America, but were redirected toward the Japanese imperial cause.  To demonstrate this process in the lives of Nisei in wartime Japan, I begin with a broad historical sketch of assimilation policies adopted by the imperialist Japanese administration, and I consider the place of Nisei as subjects of Japan’s imperial dominion. I then examine elements of the physical environment in wartime Japan designed to unite the populace through public mediation of individual emotions such as anxiety, fear, and grief.  I conclude by considering the body in motion—Nisei performing work for the imperial cause as soldiers, students, volunteers, and government employees.”

A draft of Carly’s paper is available at this link. If you have not received the password for the post, or if you have concerns about accessibility, please feel free to contact David Krolikoski at davidkroli at uchicago.edu or Brian White at bmwhite at uchicago.edu. 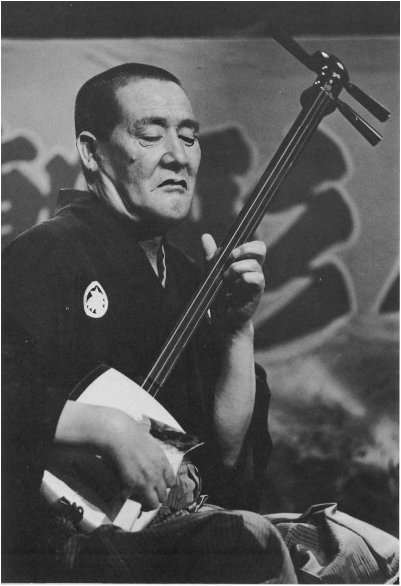 On Friday, October 16, please join us in welcoming Joshua Solomon, who will present a work-in-progress version of a dissertation chapter. As Joshua explains, “This chapter offers a new historiography of Tsugaru folk music, with an emphasis on technological appropriations and the critical role of production.  Through a detailed close up of the musician Takahashi Chikuzan’s musical and cultural discourse, I argue that the historical trends of capitalization and massification of Tsugaru folk music, and Tsugaru-jamisen in particular, reflect a fundamental shift in away from a “folk epistemology.”  I do not suggest a narrative of irretrievable loss; on the contrary, I suggest that the sujimichi [principle] of a non-modern Tsugaru aesthetic economy is inherited in much contemporary shamisen performance, although in sometimes significantly muted forms.  Based on these observations, I suggest a wider critique of the ways in which we modernized and massified scholars might prepare ourselves to approach non-modern/ folk musics in the future.”

A draft of Joshua’s paper is available at this link. If you have not received the password for the post, or if you have concerns about accessibility, please feel free to contact David Krolikoski at davidkroli at uchicago.edu or Brian White at bmwhite at uchicago.edu.