Join us in support of our own! Andrea Harris Jordan will be presenting work from her dissertation on Thursday, January 31 in Goodspeed Hall room 205 at 4:30 pm. The background info is attached below. Check out this abstract for starters.

My doctoral research explores the intersection of music, literature and nationalism in nineteenth-century Ireland and how people intentionally use the past for particular goals in the present. Music, embedded in literature, can serve as a lens to allow us to rethink the ways in which people interpret their history in the present as well as how we write the history of the Irish nation and nationalism. I consider how descriptions of music and music-making, musical notations, and song texts were used in the 1800s within literature to promote nationalist—cultural and political—ends. I ask how Irish people today view their nineteenth-century past in light of music, literature and nationalism. Inherent in my project are issues of violence done to oral traditions and struggles of linguistic representation in the development of Hiberno-English. I address the role of the artist in political movements; gaps and closures between popular arts; efforts and perspectives of a literati class; and questions of gender in national representation. I contribute to ideas and methods of ethnomusicology as I engage in ethnography in the archive and in the field site of contemporary Ireland. 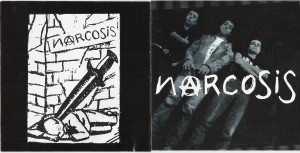 Join us Thursday, January 24th at 4:30 pm in Goodspeed Hall room 205 for this week’s workshop, featuring Shane Greene. Shane will be presenting On the Peruvian Reality of Punk’s Mode of Underproduction.

Abstract: Parting from the historical context of Peru’s 1980s underground punk scene – which emerged amid the country’s descent into a civil war and the rise of Shining Path Maoists – I develop a theory of punk as a mode of global underproduction. Theoretically, the aim is to elaborate on under-production as a point of relative contrast to both Marxian understandings of capitalist over-production and the more specifically aesthetic forms overproduction takes with artistic and musical commodities. I apply this theoretical framework both the general emergence of Lima’s “underground rock” phenomena in the 80s and to one of its most iconic examples of musical production: Narcosis’ “Primera Dosis” demo cassette first recorded in a garage in 1985. Details of its various lives of production and circulation – then on pirated cassette; now on US-produced vinyl – reveal the inherent relativity of under to over-production at different moments and in different contexts. Originally an under-produced icon of Lima’s street piracy-based market, “Primera Dosis” now also circulates as an over-produced status commodity in and outside of Peru.

Please join us in welcoming Gabriel Solis and workshopping his paper “The Black Pacific: Music and Racialization in Papua New Guinea and Australia.” The abstract and link to the full paper are below. Thursday, January 17th at 4:30 pm in Goodspeed Hall, room 205. Refreshments will be served.

When Mandawuy Yunupingu, of the Aboriginal Australian band Yothu Yindi, recorded the song, “Treaty” in 1991, he used a prominent, Funk bass and drum part.  Similarly, when Tolai singer George Telek wrote the song “West Papua,” calling for an end to Indonesian colonialism, he modeled it on the music of Bob Marley and the Wailers.  Together these two songs amount to high points in a proliferating field of African Diasporic musical references in the work of politicized artists in the Southwestern Pacific.  This paper argues that the connection between music, blackness, and the anticolonial struggle for Indigenous peoples in Papua New Guinea (PNG) and Australia is neither incidental nor insignificant; in fact, it is a crucial linkage in what Howard Winant calls the “trajectory of racial politics.”  I combine ethnographic and historical research in the Australia and PNG, showing that local identifications with blackness as a racialized identity category is politically effective and has served as a way of recognizing and engaging the modern world system from an explicitly subaltern position.

Crucially, I draw attention in this study to the making of a “Black Pacific” through ongoing interactions in the region between Indigenous peoples—Aborigines and Melanesians—and people of African descent.  The history I trace in this paper is one in which mass-mediated musical products—first sheet music, later sound recordings and now video—have played a significant role, but only as part of a process of social action that critically involved black sailors, servicemen, and artists beginning at least as early as the late 19th century.  The importance of African Diasporic people in the Pacific is less widely discussed than in the Atlantic, and less commonly recognized than that of Europeans in the region representing the colonial powers, particularly England and France.  Nevertheless, my research shows the profound effect of a steady flow of black people, mostly from the U.S. and the Caribbean, in disseminating black music and equally importantly, ideas about resistance and liberation associated with that music.

Perhaps most importantly, this paper adds to the literature on racialization as a global phenomenon from an Africentric perspective. Most scholarship on blackness in the Pacific has been implicitly Eurocentric, treating the development of race in the region simply as a product of the Anglo power structure, and has focused on the antimony of black and white.  As a result, too little attention has been paid to African Diasporic people and their connections with Indigenous peoples in the development of racial consciousness within the black Pacific.  In this project I highlight black people’s perspectives on their own artistic products and their relationship to racial identity.  In that light, music serves as an ideal focal point for the development of an Africentric and Indigenous-centric counter-narrative, because it has served as a key mode for both identification with and the expression of blackness in the region.