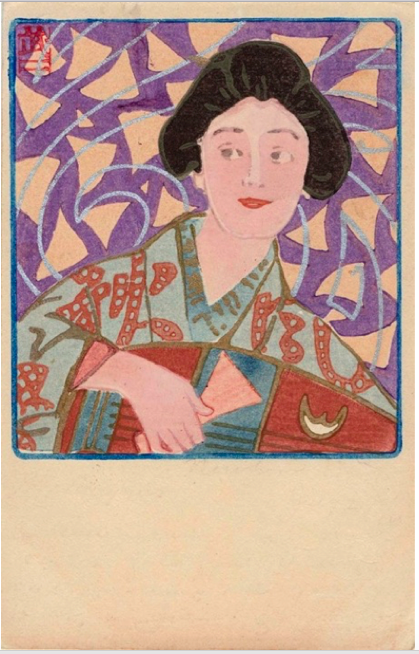 Fujishima Takeji’s (1867-1943) wood-block printed postcard, Geisha and Biwa, features a geisha, clad in a boldly patterned kimono, set against a backdrop of silver metallic waves and dancing triangular shapes. This 1905 postcard is addressed, stamped, and postmarked to Meridan, New Hampshire. Now residing in the Boston Museum of Fine Art’s collection, this postcard has traversed vast distances of time and space and bears witness to a story of emerging communication networks and changing visualities in turn of the century Japan. In this paper, I argue that the artist postcard was a medial point of contact between emerging technology, aesthetic negotiation, and the masses. Through this point of contact we can access dimensions of the artist postcard’s role in late Meiji period. Specifically the artist postcard was a site for producing and seeing ideas about new Japanese aesthetics. Further, the ensuing debate over whether or not the postcard was fine art reveals the deep-seated anxiety over the recent formulation of the field of aesthetics and the boundaries of fine art. Postcards such as Fujishima’s series offered a distant and fantastic idea of modern Japan to the foreign and domestic audience that could be inscribed, sent, and ultimately possessed.