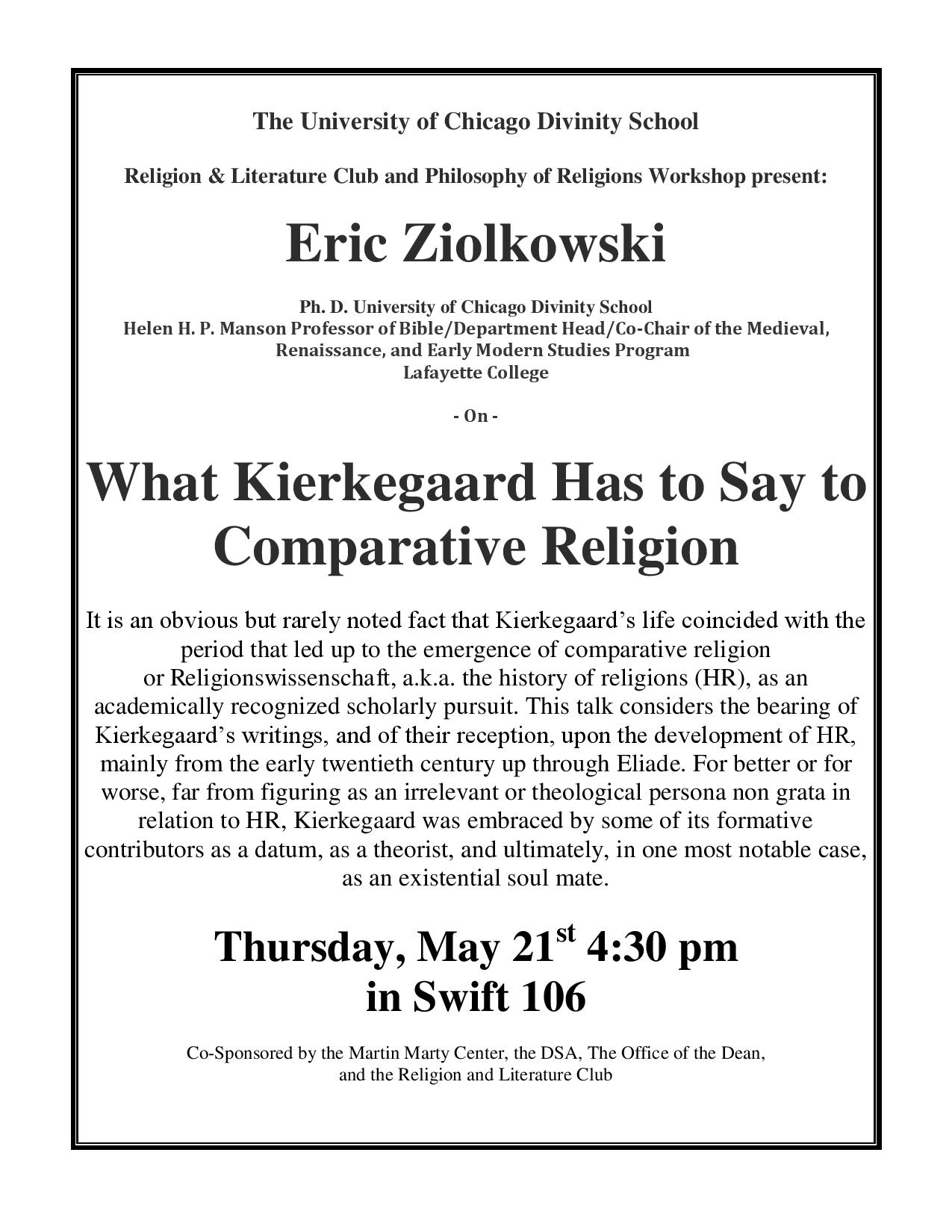 “Kierkegaard and the History of Religions”

Co-sponsored with the Religion and Literature Club

Kirkegaard’s life coincided with the period that led up to the emergence of comparative religion or Religionswissenschaft, a.k.a. the “History of Religions,” as an academically recognized scholarly pursuit.  This talk considers the bearing of Kirkegaard’s writings, and of their reception, upon the development of HR, mainlty from the early twentieth century up through Eliade.  For better or worse, far from figuring as an irrelevant or theological persona non grata in relation to HR, Kierkegaard was embraced by some of its formative contributors as a datum, as a theorist, and ultimately, in one notable case, as an existential soul mate. “Reverence as Critical Responsiveness: Between Philosophy and Religion”

A major task of a future philosophy of religion will be to contribute to a post-critical ethos of participation. By “post-critical,” I mean that such a contribution requires philosophers of religion to reimagine the critical relationship between philosophy and religion. By “participation,” I gesture with some hesitation and much qualification to philosophical and religious visions centered on conforming mind and body to God, cosmos, reason or some other fundamental reality through active intellection and receptive contemplation. Today, the idea that we can identify such a reality is properly suspect and so subject to various critical procedures that expose the historical and social construction that produces this “reality.” But even if we agree that it is  imperative to submit all claims for what is ultimately real and authoritative to historicist and other forms of criticism, the question of how we hold together incisive critical thinking and affirmative attachment to or participation in existence remains. Philosophers of religion, because they work at a site of crossing between the philosophical and critical, on the one hand, and the religious and participatory, on the other, have a crucial role to play in working through this question. One starting point is William Desmond’s idea of a “two- way intermediation or communication between religion and philosophy, not just a singular direction from religion to reason.” From here, my paper considers religious dispositions or virtues such as gratitude and reverence as critical disciplines of attention and thoughtful vigilance. I thus seek to counter the modern, but by now well-worn idea that where philosophy and other forms of modern thought are critical, religious thought, grounded in such dispositions, is not.