Please join us for a joint workshop session sponsored in part by EthNoise!, The Arts & Politics of East Asia Workshop, and the Caribbean Studies Workshop this Thursday, April 26th at 4:30, in Goodspeed Hall, Room 205. Marvin Sterling, Associate Professor, Department of Anthropology, Indiana University, Bloomington, will present:

On the Cultural Politics of Tradition:

Michael Bourdaghs, Associate Professor of Modern Japanese Literature in EALC at UChicago, will be the discussant for the workshop.

Abstract:
For 60 years, the “sound system” has been the sonic heart of Jamaican dancehall culture. Sound systems are small groups of young men (and more rarely women) who play Jamaican music and banter in patois over high-powered audio systems before hundreds or thousands of attendees. In recent years, this subculture has reached international shores. In 1999, Japan-based Mighty Crown entered an otherwise all-Jamaican sound system competition in Brooklyn, New York, and to the surprise of many, won the event. Three years later, Junko Kudo, a dancer part of Japan’s burgeoning “reggae dance” scene, was similarly the only Japanese performer in Jamaica’s National Dancehall Queen Contest; she, too, won her event. Dancehall reggae has since become a sustained subcultural, and even in some measure, mainstream popular cultural phenomenon in Japan, attracting millions of fans and making the country one of the world’s most vital reggae markets. In this presentation, I trace the roots of Japanese reggae from the early 1970s until the present, focusing on the musical productive and performative strategies through which a distinctive “J-reggae” has come into being. I argue that these strategies significantly invoke discourses of the traditional that are deeply interlinked with those of modernity in Japan, a modernity shaped by the specter of Western domination that Japanese have long had to negotiate.  I focus on the link between these discourses of the traditional and a contemporary ethos of cultural internationalism in recessionary Japan, in which many Japanese reggae practitioners imagine global southern countries like Jamaica as simultaneously signs of these artists’ cultural and sociopolitical cosmopolitanism, but also as tradition-bound and thus instructive symbols of Japan’s own potential rebirth. 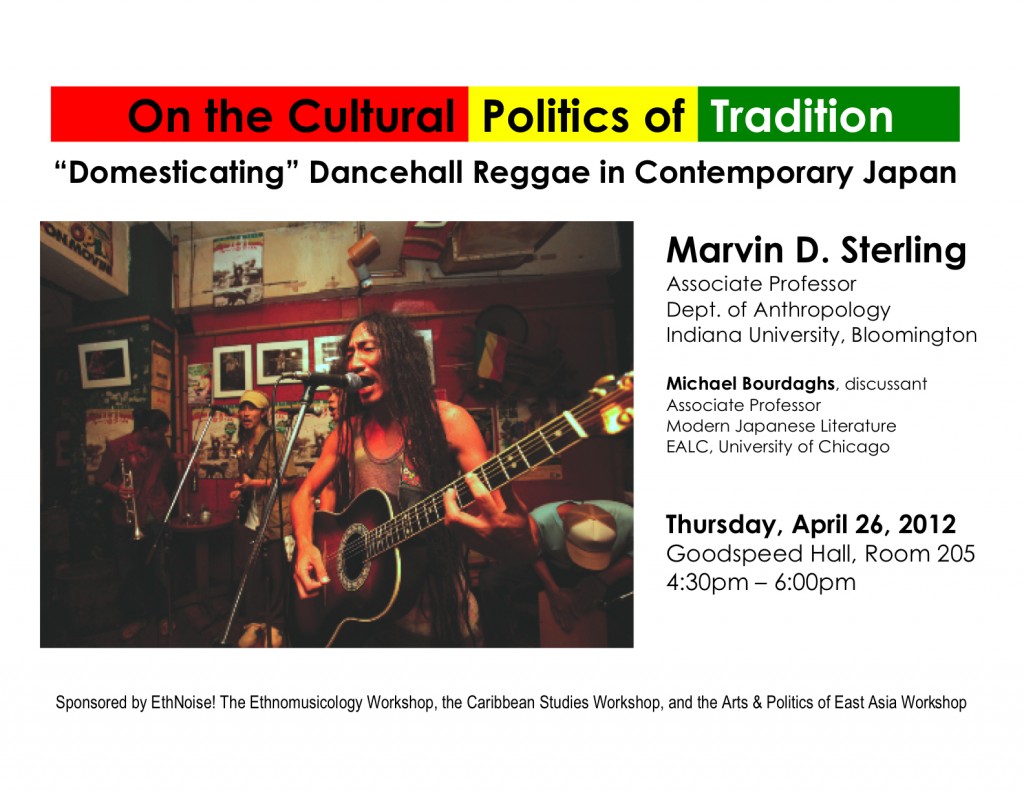 Please join us for the Ethnoise! workshop this Thursday, April 19th at 4:30, in Goodspeed Hall room 205.  We will welcome Fernando Rios, Visiting Assistant Professor in Ethnomusicology at the University of Maryland, College Park as he presents:
“They’re Stealing Our Music”: The Argentinísima Controversy,
National Culture Boundaries, and the Rise of a Bolivian Nationalist Discourse”
Abstract: In Bolivia, the notion that foreigners incessantly appropriate the country’s folkloric music has served as a powerful elicitor of national sentiment since the early 1970s. This presentation examines the rise and consolidation of this nationalist discourse through the lens of the Bolivian anger that erupted following the Argentine charango player Jaime Torres’ 1973 performance in the nativist film Argentinísima. I argue that this reaction was connected to growing local concerns regarding Argentine as well as Bolivian blurring of national culture boundaries in the realm of Andean folkloric-popular music performance practices. I also contend that the Bolivian appropriation discourse that took shape in this period facilitated the localization of certain folkloric musical styles, specifically those that Argentine and other non-Bolivian artists also performed, by foregrounding Bolivian nationalist meanings and refuting alternative interpretations. In closing, I suggest that ethnomusicologists may wish to expand the range of topics normally considered as examples of localization or indigenization to include expressive practices that are not clearly of foreign origin and that serve as emblematic national traditions.

Fernando Rios is Visiting Assistant Professor in Ethnomusicology at the University of Maryland, College Park, where in the fall term he will begin his appointment as Assistant Professor. His research, which is based on fieldwork and archival research conducted in Bolivia, Argentina and France, explores folkloric musical representations of Andean mestizo and indigenous expressive practices in relation to Bolivian nation-building projects and international artistic trends. His recent published work includes articles in Ethnomusicology Forum (“The Andean Conjunto, Bolivian Sikureada and the Folkloric Musical Representation Continuum,” 2012), Ethnomusicology (“Bolero Trios, Mestizo Panpipe Ensembles and Bolivia’s 1952 Revolution,” 2010) and Latin American Music Review (“La Flûte Indienne: The Early History of Andean Folkloric-Popular Music in France and its Impact on Nueva Canción,” 2008).

Please join us at the Ethnoise! workshop this Thursday, April 12th at 4:30, in Goodspeed Hall room 205.  We will welcome Gregor Kokorz (Mellon Visiting Scholar at the University of Chicago) as he presents “Listening to Difference: Reflections on how to write a history of ethnomusicology”.

Dr. Gregor Kokorz holds a Ph.D. in musicology from the Karl-Franzens University, Graz, Austria with a doctoral thesis titled “In Search for Difference. Ethnomusicology in the Mirror of Modernity” (2008). He has been a member of the interdisciplinary research project “Modernity. Vienna and Central Europe around 1900” at the University of Graz and a research assistant at the Center for Austrian and Central European Studies at the University of Alberta, Edmonton, CA. Since 2011, he has been engaged in the research project “Music – Identity – Space” at the Austrian Academy of Science, working on a series of essays on music and national identities titled “Musical Space, Trieste around 1848.” Presently he is a Visiting Mellon Scholar at the University of Chicago. His research focuses particularly on the issues of modernism, the history of science, and cultural transfer.